Scoliosis defines any abnormal, sideways curvature of the spine, and typically occurs in individuals from 10 to 18 years of age. When observed from behind, a spine is usually straight. However, the spines of those afflicted with scoliosis curve in one of three ways:

The cause of most scoliosis is unknown, though hereditary elements appear to play a role. Neuromuscular conditions, congenital disabilities, or spinal injuries may spur its less common types. Affecting more than 3 million people in the U.S. annually, signs of the affliction will usually begin to appear during the growth spurt immediately preceding puberty. While the rate of development is similar in boys and girls, young women are at higher risk of the curve becoming more severe and requiring treatment. While typical cases are mild, children can develop increasingly severe spine deformities as they grow. Spine and Rehabilitation Centers in Houston can help detect, diagnose, and treat the condition. 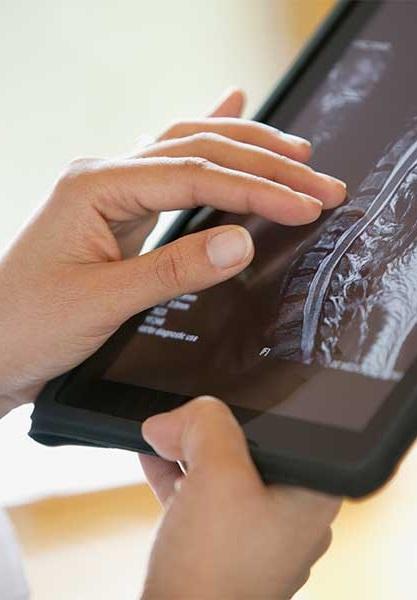 Our spine and rehab specialists in Houston and The Woodlands have experience determining appropriate courses of action for scoliosis treatment. We consider the curve’s pattern, severity, and location as well as the sex and maturity of patients dealing with the issue. Appropriate spine and rehab treatment options are crucial, as complications from scoliosis may include lung and heart damage as well as chronic back pain. Our physical therapy specialists will likely suggest the use of a back brace for a child whose spine exhibits a 20- to 40-degree curve to help arrest its progress as he or she grows. The customarily hard plastic support devices are designed to conform to the body without restricting most activities. They are most effectual when used regularly between 16 and 23 hours per day until the bones stop growing. Braces cannot correct a curve but serve to control it, thus preventing the need for surgery.

Surgery will likely be recommended for patients with spines curving between 45 and 50 degrees, as such severe scoliosis is typically expected to get worse and potentially affect internal organs. The most commonly used type of surgery is spinal fusion, which bonds two or more vertebrae together, disallowing their independent movement. As the back heals, these vertebrae will become a single, straight bone. With growth in this area halted, the spine’s curve should not continue to change.

Mild curvature of the spine can sometimes go undetected because it occurs gradually and typically does not cause pain. However, the medical professionals at our Houston Spine and Rehabilitation Centers are trained to identify visible signs of scoliosis, which include uneven shoulders or the protrusion of one shoulder blade, an uneven waist, or one hip being higher than the other. Our physicians will continue to monitor the curvature of patients’ spines after scoliosis is diagnosed. A curvature of 20 degrees or less rarely requires treatment. Any measure of curvature exceeding 20 degrees may require surgical or non-operative treatment in the interest of a patient’s health and physical appearance. A spinal curve of more than 50 degrees is more likely to progress into adulthood, while curves of 70 to 90 degrees often result in disfiguring deformities.